All of our staff are working normally, but remotely, and have access to all necessary support tools and the network.

Services and support will continue as usual – if you have a support query please email support@verygoodemail.com and we will respond as quickly as we can.

Our very best wishes to all our customers and Partners at this difficult time.

We’ve seen an influx of what is known as ‘CEO Spam’, where an email is supposedly sent from the boss’ iPhone asking the recipient to urgently send some money to a bank account.

Please be on the alert for this, and help your users not to fall for what is quite a clever scam.

Meanwhile, we are just in the process of adding a rule to our anti-spam software to hopefully block all of these – this will only work if your users are using our anti-spam system, of course!

A requirement of MessageBunker that we store the user’s credentials, encrypted of course, so that we can access their mailbox for archiving. Wherever possible, we look for alternative solutions that allow for improved security and privacy. Gmail offers one such solution.

MessageBunker can be granted a token by Gmail with the end-user’s permission, that needs refreshing hourly. This token can be used to log in. The process is known as ‘oAuth’ as is fairly common on the web, but this is the only implementation for IMAP that we are aware of.

When a user creates a new archive on MessageBunker, we send them to Google to give us permission to access their Gmail. We then get a confirmation back and a token we can use to log in.

Old MessageBunker is dead, long live the new one! 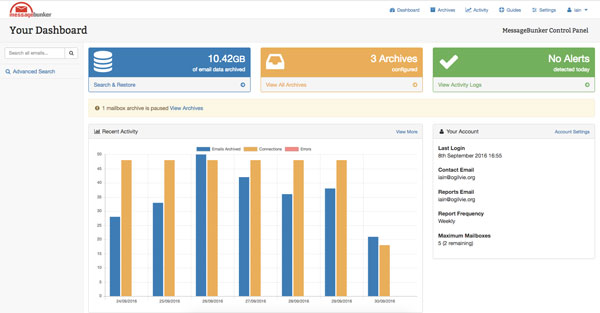 Following on from our announcement at the end of September regarding the new MessageBunker interface and initial running of old and new versions in parallel, we can announce that, as of today, the old site has now gone – to be completely replaced by the new one.

Take a look at messagebunker.com

MessageBunker gets a major upgrade!

The development team have been beavering away over some hot code again and we’re delighted to announce the launch of a new and improved MessageBunker email archiving, compliance and discovery service.

The updated service provides a brand new web interface, with statistics/graphs, lots of new help files, enhanced search facilities and a host of other improvements. In addition there is an all-new mobile site for smartphones that can be set up as a web app. too.

To really experience the improvements we’ve made please take a look at new.messagebunker.com using your existing MessageBunker login credentials.

Not using MessageBunker already? Take a look here for peace-of-mind!

Downtime is not an option for us. We might get away with a minute or two in the middle of the night, but running an email service means millions of emails a day at all times of day.

So, after years of resisting I was finally lured by the charms of the latest and greatest MySQL – well almost. After wasting a day of my life trying to import my data into MySQL 5.7, I switched to 5.6 and all worked like a dream. So, having run with MyISAM tables all this time, why switch to InnoDB. Here are the reasons for us:

So, how do we get from here to there without a lot of pain in the middle. The answer is authoritative DNS servers and a spare MySQL server. All servers that use this database must access it via a name (we use ‘sql’ for the main read-write database and ‘sql-ro’ for the replication slave). In our situation, they query our caching DNS servers that are also authoritative for our domain, so if I make a change, it happens instantly for all our servers.

The process then goes like this. Existing live servers are called sql001 (master) and sql002 (slave). Our level of traffic is such that one server can cope with the full load, particularly at off-peak times, so we will use this to help us.

This is very much an overview, and you should google for the exact commands to use, config file setups for my.cnf etc to suit your own situation. There will undoubtedly be some gotchas along the way that you have to look for (for example, after upgrading to 5.6, we had to recompile any code on that server that used MySQL as the v5.1 libraries had been removed).

And now for the gotchas, which I will list as I discover them:

Gateway gets a Major Upgrade!

We’re delighted to announce the launch of our new Gateway Control Panel that picks up on recent design changes to our website and provides a number of new features, as well as more intuitive navigation. 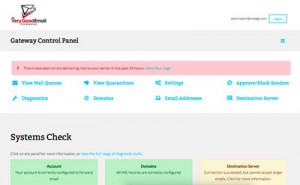 New tools for Gateway include attachment filtering, spam digest controls and a range of comprehensive diagnostic tests – all combining to make our Gateway service even more powerful than before. New stats clearly demonstrate the value and results of using the service.

The new interface is live now and will run in parallel with the old interface for the next three months, after which we’ll discontinue the old one. This will take place on Tuesday 2nd August 2016.

To view the new Gateway interface point your browser at https://gateway.verygoodemail.com and use your existing login and password.

If you require any assistance, or have feedback on the new interface, please let us know at feedback@verygoodemail.com

Email Archiving and Discovery for Microsoft Exchange and Office 365

MessageBunker silently duplicates and stores every email you send and receive in our secure data facilities. It logs into your account on a regular schedule and works with any Microsoft Exchange, Office 365 (Enterprise account), IMAP or POP3 server. It keeps your email regardless of whether it is deleted locally.

Use the ‘journaling’ feature to send copies of emails to MessageBunker, which will then identify the sender and recipient(s) and add the to the relevant mailbox on MessageBunker. The service will also allow for scenarios where multiple domains exist on a single Exchange server, possibly for multiple customers.